Escaping Havana, I spent the next three days in Viñales and the surrounding countryside. Full of new people and new scenery, my days became somehow more relaxing and more hectic at the same time – perhaps I was beginning to follow the rhythm I could feel in the land and its people.

I said goodbye to the Belgian women and took a cab out to the bus station. For no particular reason, I felt pretty great. At the station I spent some time talking to a fellow who tried to wrangle me into taking his taxi instead of the bus. His friends laughed and called him Pajaro because he spoke so much.

I bought a tasty pizza and idled on a street corner, for once feeling more like shark than sheep. A European woman huffed and puffed past me with her backpack, militantly ignoring the calls of taxi wranglers. I ended up sitting behind her on the bus. She gave me a few saltine crackers and introduced herself as Beate, “from Jehmany.” She complained throughout the bus trip of not being able to trust Cuban men, all of whom were quite polite but simply wanted to sleep with her. But she did mention that “oh but vee Jehmans like to complain ya,” which made me smile.

Yanelkis, the propietor of my casa, was waiting with a sign when I arrived in Viñales. Casa owners were so desperate for customers that they leaned over the chain cordon, whistling, calling out, and waving signs and photos of their homes. It reminded me of a pig calling contest. I was the pig.

At one point during our walk to the casa, I mentioned to Yanelkis how beautiful it was here, and she replied “Si pero no es facil…” offhand, a mumble, and yet it still sounded like something said too often, almost automatically: an anthem.

Beate and I had dinner at a nightclub in the center of town. A band played salsa and I watched in awe as folks danced more artfully than I’d ever seen. A British woman leaned over and asked to borrow my lighter, and we soon got to talking. Helen was a wild, charmingly self-assured executive for Sony, out on a month-long holiday. She called me “sweetie” but I didn’t mind; with that accent she could call me anything. Helen introduced me to an Irish bloke and fellow citizen of the world named Gavin.

Gavin and I got to talking about hardcore countries and I asked him what country he recommended as most hardcore. He answered, “Fucking Burma, mate,” then proceeded to tell me a great story about hanging onto the side of a bus in Burma for hours (no space inside), drenched in chicken oil from a vat on top of the bus that had busted open, then having to stop for a few hours on the side of the road to fix a flat tire, not knowing that he was a fifteen minute walk from his destination.

Beate and I took a bus/boat to a small island named Cayo Ines De Soto. We spent the day on a completely empty, postcard beach: fine white sand like powdered milk, emerald and azure water, schools of fish that darted around our ankles as we stomped and splashed through the long, shallow tide. I almost felt tacky – I kept expecting someone to appear and hand me a Corona.

Later, back in town, I snuck into a no-tourists general store and inquired with the locals about purchasing cigars. A fellow who had just received a handful of fine-looking cigars from the cashier turned to me and said, “Oh, I’m afraid there aren’t any stores nearby that sell cigars.”

I looked at the man. He seemed serious. I looked around at everyone else in the room: somber faces all around. I looked at the cigars in his hand. Each cigar had a simple blue label identifying it as the national brand. I already knew the answer but pointed to the cigars and asked anyway, “Didn’t you just buy those? Just a moment ago?”

“Oh, but you see,” he explained officiously in slow, gringo Spanish, shoulders hunched, “these cigars, ah, we make them only for ourselves,” he made a gesture of holding the handful of cigars to his chest, “and therefore we do not have any for you.”

Here I was in the heart of Pinar Del Río, Cuba’s most prolific province for growing tobacco, and I could not find a single shop that would sell me a cigar. I sighed (audibly), then rephrased my question, “Do you know anyone – anyone at all – that has cigars not just for themselves, that I can purchase?”

The cigar man leaned in and began, “Well, I do have a cousin in the countryside who sometimes,” but didn’t continue. His eyes went wide and he took a step back.

I turned around and saw a hulk of a man step inside, and it took me a moment to resolve the vision of crisp grey uniform, a red beret, and shiny black boots. In my whole life I’ve never seen fear settle into a room like it did just then. Eyes went wide even while looking away, every man instantly pretending there wasn’t a trespassing foreigner standing up at the counter. One person who had entered the store moments before bolted back outside.

The policeman walked up to me, reached up with a fist the size of a newborn and shook my hand. It was a firm shake. He looked right at me and said “Buenas tardes.”

He said nothing else but simply looked at me. I looked at him looking at me.

The cigar man put an arm around my shoulder and said, “So, that restaurant you were asking me about,” leading me towards the door, “let me show you where to find it.”

That evening I met Helen and a fun assortment of travelers back at the nightclub. A raucous comedian told jokes over a scratchy PA to a mostly Cuban crowd. He began his act with “You know, times really are changing,” which piqued the interest of those of us at the table who could speak Spanish. I was rapt with the prospect of seeing some real dissidence. Instead, the comedian broke into a series of Viagra jokes. The crowd went wild. Oh well. No revolutions tonight.

I met an impressively magnanimous Irish fellow named Reggi. Reggi told me a story of his first crewing experience: he, his friend, and a captain were to transport a very large, very expensive yacht from Dublin, around the Iberian peninsula, to somewhere in Italy. Neither Reggi nor his friend knew a thing about navigating a boat, and rather than learning from the captain, they found themselves having to figure out nearly everything themselves. This resulted in, among other fiascos, crashing the very expensive yacht into a very solid sea wall at a port in Portugal. As time progressed, Reggi and his friend saw less and less of the captain, sometimes days passing before the fellow even stepped out of his quarters. Finally, after a particularly long period of the captain staying holed in his quarters, Reggi and his friend kicked in the door and found the guy huddled in a fetal position, apparently in the middle of a nervous breakdown. He was surrounded by books such as “Sailing Fundamentals” and “How to Read a Nautical Chart”.

Reggi, his Welsh friend Kate, and I took off for a hike through the campesino surrounding Viñales. Out on a dirt path we ran into a tobacco farmer riding his bicycle into town. I tried my schtick again, asking the fellow if he knew where I could purchase cigars. From his knapsack he produced a bundle of cigars, explaining he’d grown the tobacco, cured it, and rolled the cigars for his own use, but he’d be happy to give us a few. We were overjoyed, and Reggi and I gave the guy a few pesos for his time. A cup of coffee’s worth of change for us… two or three days salary for him. We hiked around the countryside with lit cigars clenched in our teeth, pretending we were heroes of the Cuban revolution.

Further into our hike, we found a passel of hogs lazing in the shade in front of a cave entrance. Dozens of piglets were wrestling and tumbling over a listless, resigned sow. The hogs paid us no mind as we walked past into the cave. With only a lighter in hand, we explored a series of tunnels that opened into a large, cool cavern. We all agreed it would be an excellent place for a party.

Along one of the high mountain walls, we found caveman-style paintings that were meant to portray the history of evolution. There was a small straw-hut bar at the base of the rock wall, and we had a drink while contemplating the surrealness of our surroundings. A young chap rode by on horseback. 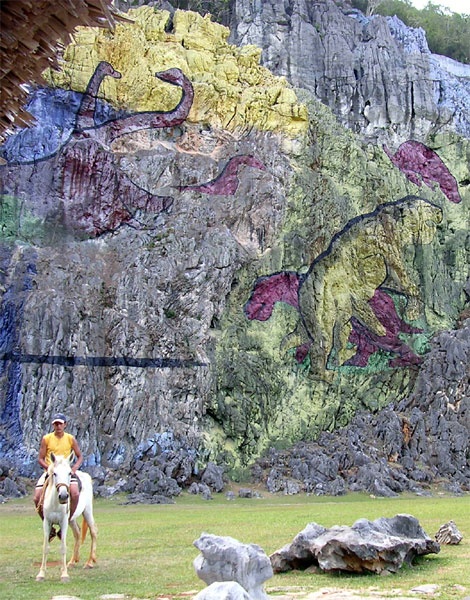 Yanelkis prepared a delicious, belly-stretching dinner, and the most excellent fruit cocktail drink I’ve ever tasted. With dinner I watched Castro on public television. He discussed world events. Slowly. Every few minutes he would turn a page in his notes, regard it for a few moments, then continue on in a sincere but somewhat histrionic way. He looked frail.

My final night in Viñales was the stuff of legend. Every character I’d met there showed up. At the nightclub, Reggi brought out a wooden magic box that turned out to be a hell of a conversation starter, and soon we were talking with a group of curious Cubans at the table next to ours. Helen and I made ridiculous impromptu plans to extend our time in Cuba, but because I couldn’t withdraw money here, she would bankroll me during our trip, and I would mail her a check upon returning home. Gavin and I traded cigars we’d found in the area, like spoils of war. A great local band played rumba.

I will never, ever, ever again get into a drinking competition with Dubliners.