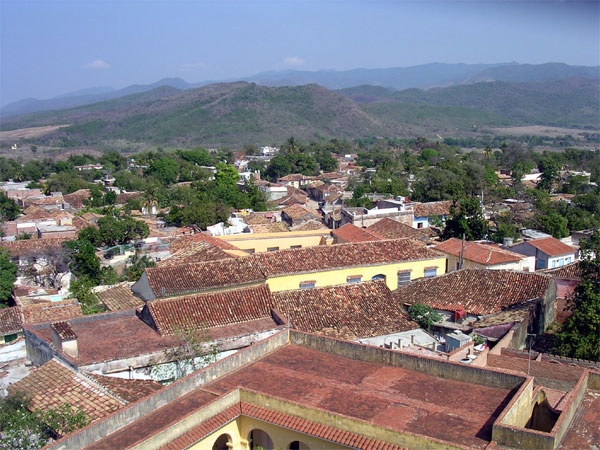 I spent the next few days in Trinidad, an old Spanish colonial town that was gussied up in the early 19th century when French planters arrived, having fled from a particularly unpleasant slave revolution in Haiti.

I spent the days wandering up and down old cobblestone streets, marveling at the old architecture and the people they housed. I spent the evenings listening to music and meeting more interminably fascinating people.

I went horse riding with Jeny, a real salt-of-the-earth fellow. He took me, a group of women from Belgium, and two (alarmingly forward) Israeli women all over the countryside surrounding Trinidad. We ambled through scenic pastures, and there were fruit plantations and hillsides and fording rivers and a swimming hole and whatnot.

What stands out in my memory is the time Jeny spent with me, following an argument I had with him when I first showed up in the morning. He asked me to pay a different fee than what we’d agreed on. Jeny knew I was annoyed, and as we were finishing up the tour, he rode up to me and said, with a twinkle in his eye, “Why don’t you stick around? I’ll show you a few other things.”

“I’d love to,” and the always-delicate broaching the subject of money, “but I don’t have a whole lot of…”

“No no.” Jeny cut the air with his hand. “I’m not interested in money. You holding up okay? Good to go for a few more hours?”

After everyone else left, Jeny picked out his two fastest horses and we took off. I didn’t have much experience riding horses, and I tried to look cool while barely hanging on to this galloping beast. It was a blast.

We turned south, towards the ocean, and stopped a half-hour later at the gate of someone’s property. Jeny said, “Vamos a ver dromedarios!”

Dromedarios? Dromedaries? It seemed like an obvious cognate, but what the hell was a dromedary doing in the middle of Cuba? I followed Jeny into a field of royal palm. Two absolutely majestic dromedaries lay in the shade of the palms, chewing calmly at the air. I’d never seen a dromedary up close, and really there was something a bit intimidating about their size. We tiptoed up and watched them from a few feet away. Completely surreal.

From there, we rode to Jeny’s house. We had this great, great great, great great great conversation, and for the first time I got a Cuban to talk frankly about life here. This guy was proud of his living, and he worked hard. When he was younger, he’d been a fisherman, but became a horse guide later in life to have more time with his family. He had a wife and a little baby girl. During our conversation, I picked up some interesting basic facts about working in socialized Cuba:

When I asked Jeny about the people in his country who were unhappy with the conditions and the regime, he replied, “Of course it’s not easy. But these people are not looking for a better way of life. They just want more money.”

At the house, we tied up the horses, and Jeny gave me a tour of the farm animals. Inside, Jeny introduced me to his wife. He quietly led me to the back room and showed me his newborn. She was sleeping soundly. We watched soccer on his television, and Jeny’s wife served us delicious espresso. A man on bicycle showed up at Jeny’s front door with bunches of bananas. Jeny bought a bunch and gave me one. We sat on his porch for a while and enjoyed the cool breeze.

On the way back to Trinidad, we stopped at a little roadside bar where everyone knew Jeny. The bar patrons poured rum into little plastic cups and handed them up to us. I have to admit, I’d never been handed a drink on horseback before: the sensation was rather nice.

We galloped at full speed through Trinidad’s cobblestone streets, right up to the door of my casa. Upon arriving, I reached into my pocket to at least give the guy a little for his time, and he repeated that he was absolutely not interested in getting money from me. I was touched. I shook Jeny’s hand and thanked him for an amazing day.

That evening, the scene at the plaza was absolutely nuts. The dancing was even more wild than the night before. Two exceptional dancers were tearing the place up, each dancing with two women at the same time, and trading partners back and forth in myriads of spins. The Israeli women were there, and when I stopped by to say hello, they made syrupy suggestions that I go to the beach with them while eyeing me over their cocktails. I politely excused myself. The Belgians showed up as well, and I had a nice chat with them. We made plans to go on a picnic the next day.

Claudia arrived that evening with an entourage in tow: Georg, Paul, enthusiastic British Peter, and Goncalo. Claudia seemed to be trying to shake them, but they weren’t getting the clue.

I heroically located a fruit stand in Trinidad for the picnic with the Belgians. We bought bananas, tomatoes, and mangos – a giant bag full – paying perhaps the equivalent of $1 USD for everything. We hiked out of town, up the hill to a decrepit, walled-up church, then up a barren road to a nice picnic spot. Those women sure enjoyed bashing on the U.S., and we had a long talk about how terrible my country was:

“We all thought, oh, the first time you elected that Bush, it had been a mistake!”

“But then, a second time? How awful!”

What could I say? It wasn’t the first time I’d heard this from a foreigner, and it certainly wouldn’t be the last.

After the picnic, I wandered around town more and found some good esplendidos for a tenth of the price in stores. They were apparently one of Castro’s favorite - or so I was told - and I could certainly understand why when I tried to smoke one. That cigar could take down an elephant.

That evening, I helped Claudia escape from the clutches of another smarmy guy, and we went for a late-night walk through ???. At the Plaza Mayor, surrounded by intricate wrought-iron metalwork that shined in the moonlight, we found Israel playing his guitar. Israel recognized me from earlier in the day (I tipped him in a bar, and talked to him for a few minutes) and called us over. We sat down on stone steps leading down to the plaza, and he played and sang beautiful ??? songs. Another fellow was sharing a bottle of rum with Israel, and kept warning he’d “quittar la gasolina” if Israel didn’t play the right songs. And somehow, lavender flowers appeared. They smelled wonderful, and Claudia wore a wide, gorgeous smile.

Claudia and I talked till four in the morning. We talked about photography and visiting remote places. We talked about the things people talk about when they are alone. The irony of that particular conversation was not lost on me, especially since I was leaving the next day back to Havana, so I asked her to send me one of her photographs.