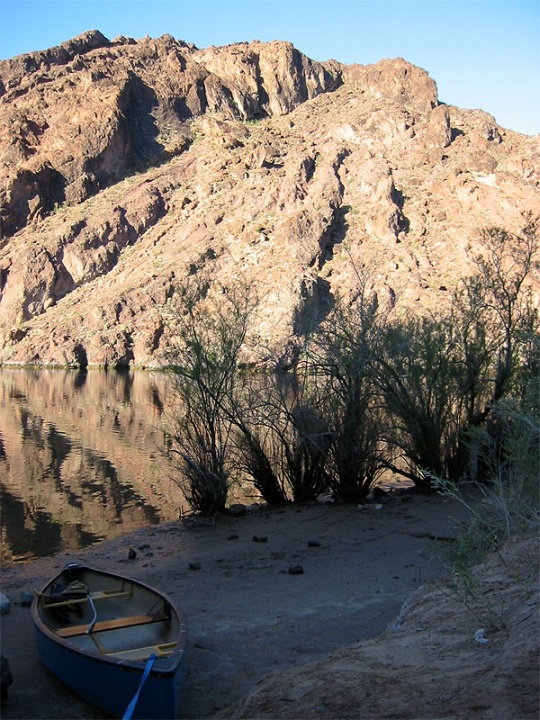 i can only attribute so much of last week and this weekend to divine providence. and i can really only focus on certain parts. but that’s how memory works – looping over itself in the space behind your eyes, allowing light through sort of distorted, kaleidoscopic, folding.

after san diego, i got an email from eric “dude, let’s go on a canoe trip!”. where? somewhere with water? ok! the next morning we had a canoe on the jeep and we were driving to taos.

on the drive there, my head was still stuck in bit buckets and miserable validation schemes. i was too engrossed in my own problems – OH WHERE OH WHERE HAS THE REAL WORLD GONE!? – the real world was the baking asphalt under our tires. i’d just forgotten, i guess.

we didn’t know much about this portion of the rio grande besides the fact that it led into the northern taos box region, which was mostly class 4 and 5 rapids (on a scale from 1 to oh jesus). eric’s infectious sense of abandon led us on, to the put in, where we cooked dinner and had a pleasant evening under the stars. the next morning we strapped a cooler of food and our gear into the center of the boat, heaved the whole thing onto the river, and set off.

the first 25 miles were relatively easy. small rapids that grew in intensity as we cut deeper into the canyon. at near dusk, we passed the following painted on a rock – “DANGEROUS RAPIDS 3 MI”, and we both shrugged. strangely enough, around 2 and a half miles down, we began to hear a loud roaring, and even the air seemed to be rushing through the canyon more quickly.

so the story goes. it feels artificial to describe sequentially what now exists in my head as a series of images:

here, things catch up in time somewhat in my head. the nice thing about freezing cold water is that it serves as cheap anesthetic as you’re tumbling over rocks and scraping off the lower half of your body. i finally caught up to the cooler, gasping for breath and completely drained of body warmth. i swam with it to the river bank, heaved it onto shore, and fell to my knees panting and shivering.

not a moment afterward, i heard yelling a quarter of a mile back upriver. eric had managed to dislodge the canoe. i could see it underwater – a submerged torpedo. we both ran after the canoe, barefoot along the edges of sharp boulders as tall as a man, and through fields of thistle and cactus. the bottoms of my feet still bear evidence. we finally caught up to it in a section of shallow, still water. we guided it to shore, and then forded our way back up river to collect our soaked supplies.

the sun was setting and we were sitting at the bottom of a canyon, shivering and wet, with a cracked canoe and waterlogged packs. we were at least 15 miles from the nearest living person. we strapped our packs on, looked up at the canyon wall, and made our way up. it was tough going, climbing up stacked boulders and cliffs with 60 lb. packs on, but we made it up with some careful stepping and the use of a well-rooted cactus or two.

we emerged out onto rolling plains of sagebrush and rock. we had an unceremonious dinner, and that night we both slept in soaked sleeping bags. overnight it got below freezing. i woke up the next morning coated with a mix of frost, mildew, mud, blood, cactus needles, and sweat.

there’s more, but it’s not important. carrying the canoe up precarious cliffs, out of the canyon (nearly dying). almost stepping on a rattlesnake (nearly dying). putting together a small pack of water and food and setting off towards civilization. reaching highway 522 and leaving eric under a tree to sleep. hitch-hiking back up into colorado, via various guardian angels, to get my jeep. driving back down, picking up eric, and 4-wheeling out across rocks and tall sagebrush to our camp-site. packing up. driving home.

i think i was in shock, for a while. i still feel a bit unsettled and out of place. i mean, i got exactly what i wished for. tough love. a harsh reminder of the world around me. an extreme series of unlucky events, followed by exactly the opposite, swooped me into some mortal terrain, and carried me out back into the familiar. you know. the place where people have air-conditioning and routinely don’t die.

now i have work to do.