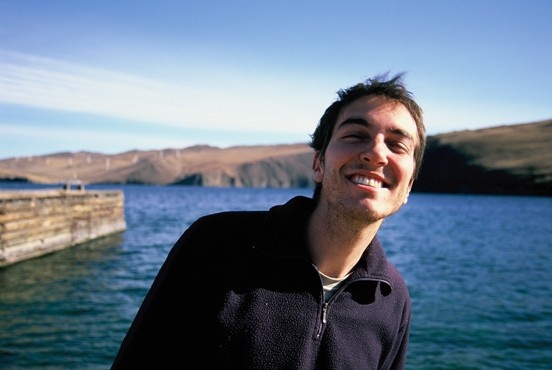 Posters inside the bus station showed seating arrangements for Russia’s great, big buses, among them the Aero Queen, the pride of the Russian fleet. I looked again at our ticket: seats 3 and 4.

I said to Claudia, “Look, we’re right up front! What luck!”

Claudia pointed out the window. “Our bus is here.”

I looked back at Claudia. She was still pointing. “What?” I tried to follow her finger.

Nothing! I looked back at her and repeated, “What?” She was laughing. She pointed again. “It’s right there!”

I was completely lost.

I walked outside and a young man said to me, “Khuzhir?”

He pointed in the direction of a minivan’s roof peeking out above the crowd. “Paidyom!” Let’s go.

The driver started up the engine, and a very large speaker about three inches from my ear came alive with hissing, roaring Russian techno, just in time to distract me from my excruciating back pain.

I leaned over and shouted into Claudia’s ear, “I DON’T THINK THIS IS THE AERO QUEEN,” and she laughed.

Four or five hours later, we crested a hill and the minivan stopped. Lake Baikal spread out in front of us, fantastic crystal azure in the early afternoon. The driver popped out the techno tape and put in something that began slowly, with tender plucks of guitar strings. “Baikaaaal, Baikaaal” a voice crooned. The driver waited there, at the top of the hill, to let the mood settle in. Then we rode on for some time listening to Russian folk ballads all about Lake Baikal, the perfect mix of solemnity and comedy.

Not long after we arrived in Khuzhir at the home of Olga and Oleg, a nice family we’d arranged to stay with for a few days.

walking along the lake, indulging in Russian steam banyas, and stuffing ourselves full of bliny and other home-cooked food. It was perfect.

The bus back to Irkutsk was even more interesting than the bus up. One guy brought a bottle of vodka, nearly everyone got drunk, and a fight broke out. We’re not exactly sure of the dialogue, but from the pointing and facial expressions, Claudia and I surmise it went something like this:

Big, Red-Faced Guy seems kind of high-strung. He has massive, laborer’s hands.
Russki is a thin, good looking fellow who seems to be friends with everyone. They all call him Russki.
Driver is the driver.

BRFG: QUIT SMOKING IN HERE!
Russki: Look buddy, relax, it’s just one cigarette.
BRFG: PUT OUT THAT CIGARETTE!
Driver: Is someone smoking back there? What’s going on?
Russki: (in a low voice) Alright alright, look here, I’ll open the window.
BRFG: CLOSE THE WINDOW! IT’S COLD OUT! WHAT’S WRONG WITH YOU?
Russki: Look pal, just for a minute…

All of a sudden, BRFG reached over the row of seats, behind my back, grabbed Russki by his collar, and pulled him back over onto Claudia’s lap. He punched Russki in the face a few times, then wrapped his meaty hands around Russki’s throat and squeezed. Hard. Russki was somehow laughing and choking at the same time. Everyone else on the bus appeared a little uncomfortable.

Another fellow awoke for a moment during the fighting. A line of drool hung from his lips. He held a wool cap in his right hand. Tipping his head forward, he threw up a bit, somehow managing to catch it all in his hat. He leaned his head back, closed his eyes, put his cap on his head, and fell back asleep.