I do not debauch. I certainly never cavort, save for the occasional quiet, metered cavort. So it was with some measure of surprise that I found myself swept away into Havana’s nightlife.

The day began like any other. I haggled imperiously with a boisterous bici-taxi driver to take me to the Necropolis Cristobal Colon. I wandered through calles and avenidas in this cemetary the size of a city. Giant gothic statues stood as starke reminders of greatness long past, of something more than flesh and blood. Atop a memorial commemorating fallen heroes of the revolution, I sat down and enjoyed a Cohiba Siglo IV. I thought about mortality (as you do). There was a cool breeze. 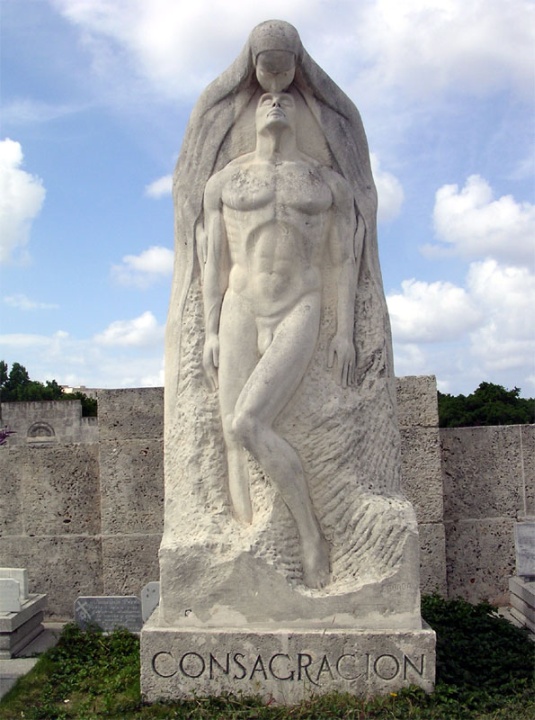 Afterwards I wandered around Southwest Havana, far removed from the city’s tourists attractions. I got a number of strange looks and big smiles. My request to buy an ice cream cone was met with hearty conversation. People were genuinely curious as to why I was there, and I was surprised to see regular stores selling groceries, toys, brand new mountain bikes, everything. It made me unsure as to how much the socialist system is a front – a crumbling facade. Most likely, Cuba is undergoing its own quiet revolution. Capitalism is seeping in through the cracks.

On the way back downtown I ran across a parade. The paraders all wore stilts, bright clown garb, and strangely bored expressions. I would see them again at the end of my visit – same people, same street, same music, same outfits.

An excellent orchestra played outside on the Prado. 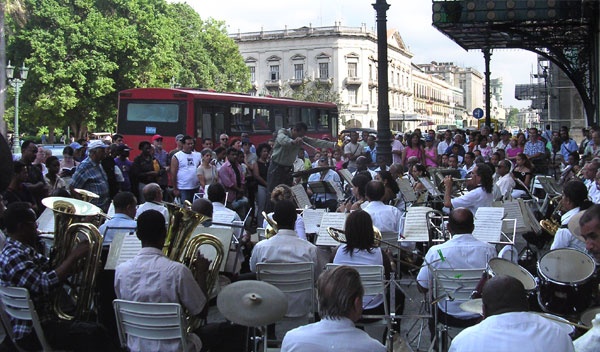 That night, Ingri, Marion and I rode down to the Vedado neighborhood (a ritzier part of town) and checked out a place called ???. The place was packed with airy socialites and 5-o’clock-shadowed businessmen, a hideaway that gave a small taste of what things might have been like during the Batista era. The band played mediocre American jazz while a subdued, quiet Cuban kid accompanied in the background with samba drums. At one point, all the bandmembers put down their instruments and stepped off the stage, except for the drum kid. He kept a slow, simple beat until the last bandmember walked off, then slid into this fantastic, animated drum solo that must have lasted a good 15 minutes. The entire club was transfixed. At one point the bandmembers came back onstage and all broke in again at once. The crowd cheered! We all loved it.

On the way back from the ???, we stumbled into a giant block party. Masses of well-dressed Havanans converged along the corners of a wide boulevard opposite the Malecon. A bottle of rum from a convenience store across the street served as instant passport into the party. Before I even knew what or how, the three of us were being spun through introductions and conversations. I had a memorable chat with a greco-roman wrestler who had toured Europe on Cuba’s national team. I ran into Chino among the crowd; he immediately pushed a bunch of chicharrones into my hand and introduced me to his sister. He took great interest in Ingri and Marion, trying to figure out how I’d arrived with such exotic guests. I shrugged and smiled.

As the night progressed, a number of young men took interest in Ingri and Marion and we soon had an entourage. A cheery fellow with an old guitar played American radio hits, doo-doo-doo’ing his way through most of the English lyrics he didn’t know. At one point we asked him to play a popular Cuban song; as soon as he began, I could see ears pricking up in the crowd around us. More people wandered over and sang along. One fellow reached both hands into his back pockets and pulled out two maracas. People began to dance.

We walked home at seven in the morning as the sun was rising. Some of our entourage followed us still, singing and playing music, kicking cans along the street. The sky above was turning a deep rich blue, laced with wispy clouds to look like a giant fresco against the ancient, collapsing cityscape. I was in a Fellini movie. It was magical.

We recovered from the night before by lounging poolside in a resort just off the Malecon. Our only concerns were food, drink, sun, and the occasional swim. Marion and I had a nice discussion about systems and politics – it’s reassuring to meet someone from an entirely different world and find you believe in some similar basic tenets.

The three of us had a nice farewell dinner at a nearby palador, as I would be headed off the next day for a new town.