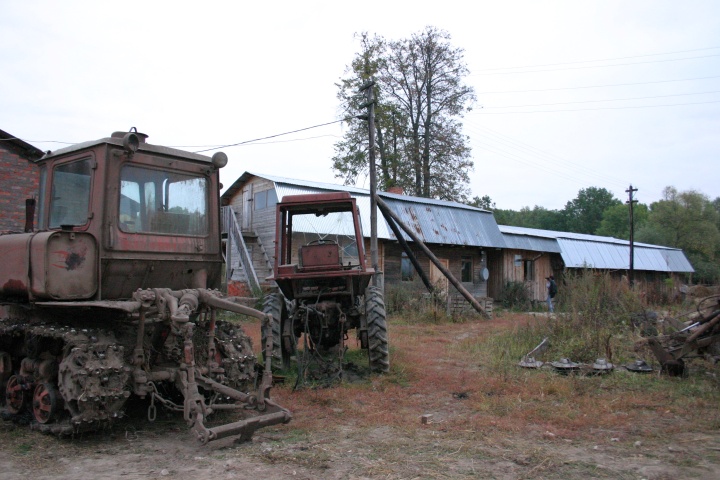 Bolotovo farm, and the cabin I shared with the other farm hands

The directions read, “From Prazhskaya station, hire a marshrutka going south on the M2, and leave the car at km 126 from Moscow (tell the driver exactly at km 126!). Go from the highway east along a little farm road, which is on the north side of the railway bridge, near the wood. Follow this road to the end and you are at the farm.”

And so I did. I found the bus on a street corner headed to Tula, showed the driver the printed instructions, and an hour later I was walked along a dirt road, past a lake, past some sideways-leaning log cabins that constituted a town, and further down, Bolotovo farm.

A man was driving a rusted soviet tractor in a field to my right - to my left were some grey, weather-worn stables.

I walked up to him and said, “Are you Markus?”

He hopped down from the tractor, “Are you Erik?”

“Yes, I am!” I replied. With the tractor engine shut off, I noticed the quiet here, a hundred miles outside of Moscow.

“Very well”, he pointed at a pile of grain sacks, stacked as high as my chest. “Help me with those.”

So I set down my pack, which contained everything I owned, and started lifting bags into the tractor. And just like that, I started my new job.

At first I thought I’d sentenced myself to a season of lonely labor on a remote farm, but boy was I wrong. The farm was a hub of activity, a historical outpost following the tenets of biodynamic agriculture, a quirky predecessor to organic farming from which sprang the CSA movement.

So this brought busloads of students and teachers to the farm. They would do chores - a class favorite was helping feed the adorable calves. The teachers would help cook, and they’d often stay for dinner. I made friends with Yuri, a charming private school teacher from a Moscow suburb, and we learned a bit about eachother’s culture, with his limited English and my limited Russian.

I taught Yuri about pig calling, a national pastime in which folks gather round a pig and try to get the pig to come to them. I said to Yuri, “See, America is crazy!”

Yuri replied, “America, not so crazy. Germany… ah, two president!” He gestured to show two presidents at either end of a line. “In middle, pig is… german people!” 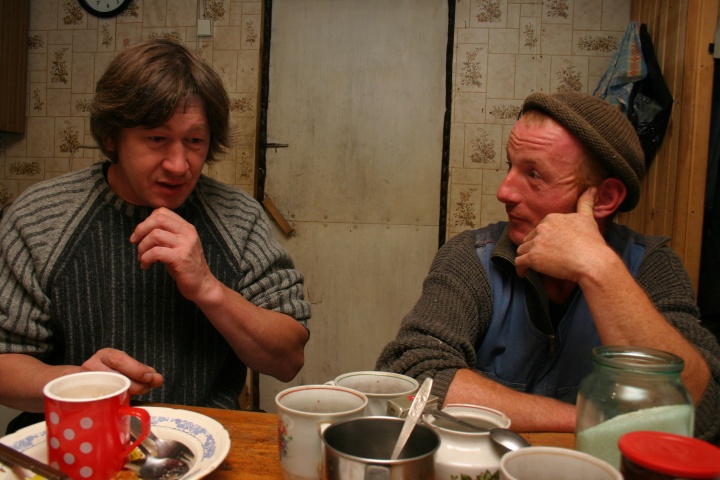 Dinner with Yuri and Markus

Markus’ family lived on the farm. His young son Alyosha visited me every morning after the cows were in. He taught me to swing upside down from the rafters, and so we’d crawl around the old structures if I had a few minutes to spare. 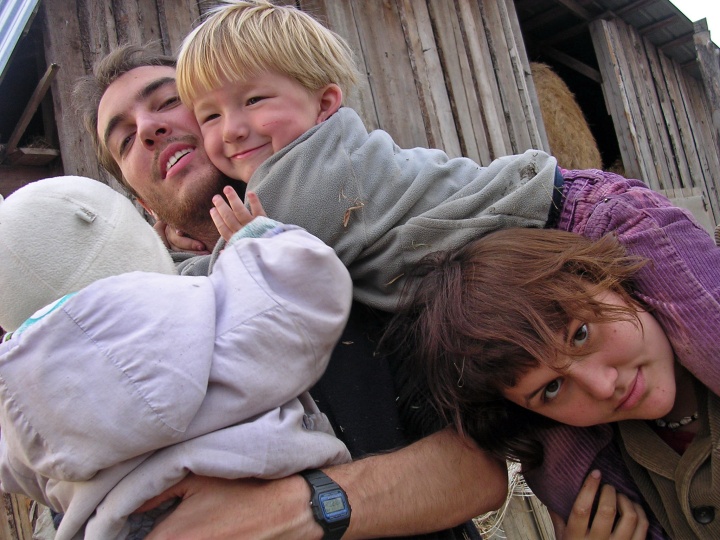 And there were two old farm hands, wrinkled and worn and a bit glassy-eyed, both named Viktor. One day they hailed me down, “Eyy! Amerikanski!”

They were both sitting on an overturned wheelbarrow, sharing sections of a Russian newspaper. One of them held up their section - it showed a picture of Hurricane Katrina making landfall in Louisiana.

“America… KAPUT! Ah hah hah!” they laughed at their own creative solution to our language barrier. Perhaps we shared a moment.

My two closest accomplices during that time were Christina and Franziska, two farmhands who travelled from Germany to work at Bolotovo. They both spoke English well enough - we would swap casual German lessons for English lessons. Here’s one I recall:

Christina and Franziska insisted on singing songs while they worked - they taught me some catchy German work tunes, and asked me to contribute in turn. I didn’t really know any work songs. The only thing that came to mind was the theme song from the Shari Lewis Show, so I taught them that. They loved it! 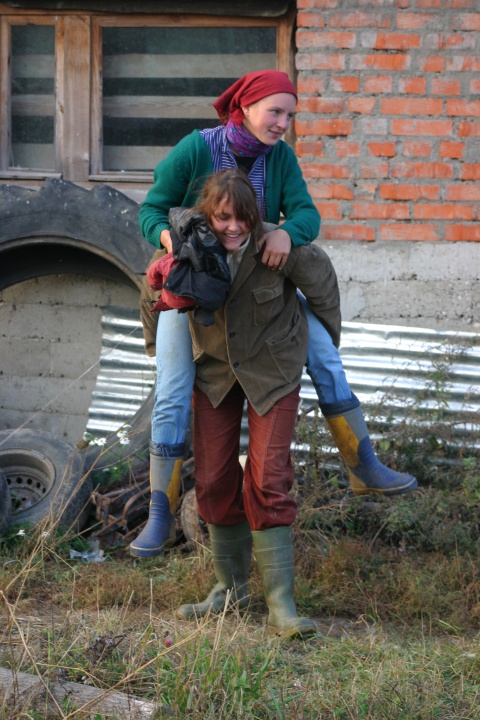 I’d never worked so hard in my life. We were up each day at 6:30, and often done by 10 in the evening. But it was deeply gratifying, and I fell asleep every night satisfied, full of accomplishment. Physical labor felt good - I felt whole. I felt connected to my own body.

Physical labor was therapy, but it wasn’t pleasant. I slipped in pig shit, carried wheelbarrows full of shit to the top of a hill, shovelled shit-urine soup, wiped it from my nose, cleaned it from under my nails. Cows stepped on my feet. A mammoth pig bit my foot and nearly broke my metatarsal. I was shocked by an electric fence. Burned off my chest hair from banya steam. And Franziska and Christina punched me a lot. 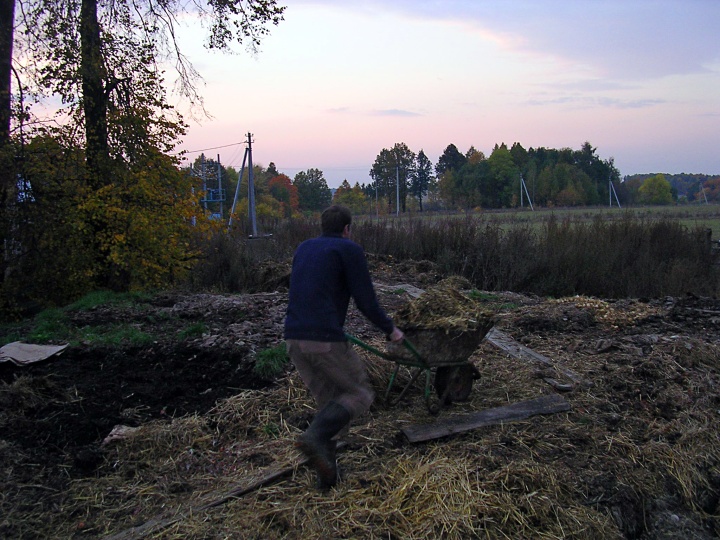 Hauling manure up the hill

I brought the cows in every morning to be milked. I became familiar with every one of them - Malinka was rebellious, obstinate, and also my favorite. I picked apples and sorted potatoes. I drove fence posts. But my favorite work - the thing that became my specialty - was working the seed machine in the mill. Here is my tale: I’d carry hundred pound bags of seed and deposit them into a big blue machine. I pushed levers, fiddled with filters, and out the other side came pure, delicious grain. It felt good to run my hand through my work product.

Bolotovo taught me about another kind of food. Milk that was in an udder an hour ago. Apples that came from a tree you could point to, raspberries from the field where you just led the cows. Chomping on a carrot pulled from a pile in the silo while sorting potatos.

The farm taught me that food is slaughtering a cow that had injured herself, after the vet tells you there’s no hope. And eating her liver in solemn silence. Seeing the farm puppies play tug of war with her tail the following morning. And the following night, cooking her ribs on an open fire and ripping them apart with your teeth.

Years later, there is one moment I remember most clearly from my time there. One early morning, after bringing in the cows more quickly than usual, I had some time to spare. So I climbed up onto a hay bale and I watched the sunrise. My body was stiff in the frigid early morning, and the warmth from the sun felt amazing. I felt amazing. I thought to myself, I could just stay here. I could live this life.

Instead, I left Bolotovo as the first snows were coming in. I went east along the Trans-Siberian.

I still sometimes imagine the world in which I’d stayed, and what that world is like.